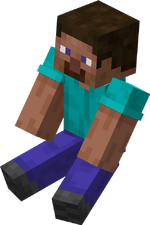 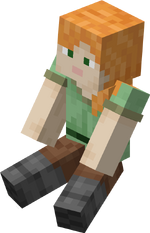 Sitting is a game mechanic used by the player and some mobs under specific circumstances.

Players can enter the sitting position under the following circumstances:

It is not possible to achieve the sitting position outside of an entity; exiting any such entity (or having it be destroyed) either causes the player to stand, or, if attempting to restrict the player's height and hitbox, to start sneaking or crawling.

Although very similar mobs do, witches, villagers, iron golems and wandering traders do not have a sitting animation.[1]

The player can tell a tamed wolf, cat, or parrot to sit by right-clicking. These mobs stay in place, and do not move or teleport to the player (unless they are attacked or the animal is forced to stand).

Wolves and cats inside minecarts or boats do not actually appear sitting.[2] 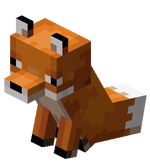 Foxes occasionally sit down on their own accord. This happens when they cannot find an area to sleep. Sitting happens briefly, and the fox resumes standing within seconds. Foxes also do not permanently sit within vehicles.[2]

Pandas also sit on their own accord, sometimes to eat.

This section is missing information about remaining mobs.
Please expand the section to include this information. Further details may exist on the talk page.