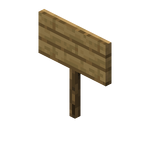 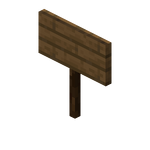 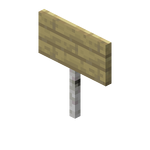 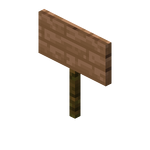 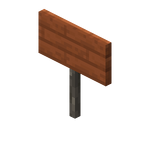 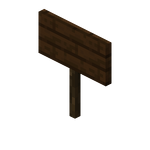 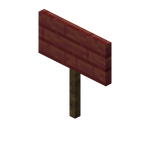 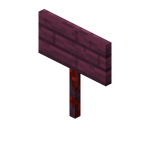 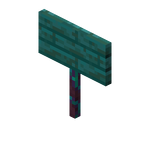 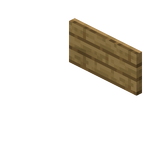 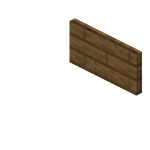 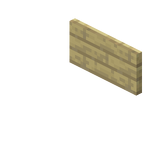 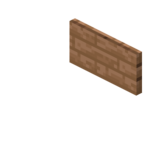 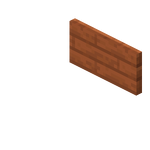 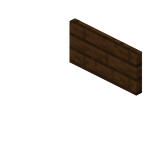 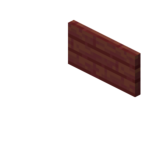 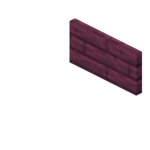 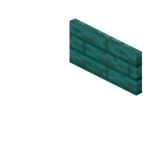 A sign is a non-solid block that can display text. A sign can also be used to block or redirect the flow of water or lava while still allowing entities to pass.

An oak sign can be found in igloo basements.

Spruce signs can be found in taiga village houses, as part of a chair.

Signs can be broken with any tool, or without a tool, but an axe is fastest.

A sign also breaks and drops itself as an item if the block the sign is attached to is moved, removed, or destroyed.

If a sign is broken while being edited, the player continues to edit the sign,[1] although in Bedrock Edition breaking the sign stops the editing operation.

Signs can be used to display text; They're commonly used to identify chest inventories, display information to other players, or note areas of interest. They may also be used to restrict lava or water movements such as in Spawner traps, or crude airlocks into submerged areas.

Signs may be placed on the top or side of other blocks (including some non-solid blocks like fences, glass, and other signs). To place a sign, use a sign item while pointing at the block the sign should be attached to, enter the desired text (possibly none), and click the "Done" button or press "escape" on a keyboard (or press × in Bedrock Edition,

on an Xbox controller,

on a PlayStation controller, or B on a Nintendo Switch controller. Closing the virtual keyboard on a mobile device also exits the typing menu). To place a sign on a block that can be interacted with by the use control (for example, chests, note blocks, etc.), sneak while placing the sign.

Signs on the top of a block stand on a short post and face toward the player who placed it, in any of 16 different directions. Signs placed on the side of a block simply float there, even if the block doesn't make contact with the sign.

For more information about the blocks signs can be placed on, see Opacity/Placement.

Placing a sign opens an editor interface resembling a magnified view of the sign. Up to four lines of text can then be entered using a keyboard (hardware or on-screen). The editor supports limited editing, including moving the cursor and inserting and deleting characters. Formatting codes can also be used to apply decorative effects such as color, bold, italic, and underline to various bits of the text.‌[Bedrock Edition only] Depending on the edition and platform in use, copy and paste operations may be supported and the editor may also support keyboard entry of Alt-codes for displaying Unicode characters.

As text is entered in the editor, the sign is updated in-world and other players can watch the message develop. Closing the interface saves the text permanently, after which the message can only be changed by replacing the sign with a new one.

After placing and affixing text on a sign, a player can change the text color by using a dye on it. When colored with dye, the text color may differ from any color specified by formatting codes.[more information needed]

In Creative mode, the combination Ctrl + pick block on Windows, or ⌘ Cmd + pick block on MacBook, can be used to copy an already-placed sign, including its text (with decorations), into the player's inventory.

A dyed sign facing east or west will have its text appear more saturated and bright than a sign facing north or south. However, it is actually the sign that is dimmer, because Minecraft's lighting engine uses side lighting to make the world appear less flat, but the text on signs is not affected by this.[needs testing]

In Bedrock Edition, inappropriate words or phrases in a sign's text are displayed as asterisks.

In Java Edition, signs can be created with JSON text, which allows complex formatting (colors, bold, italic, etc.), hover and click events, localized translation (for Minecraft technical terms, like "Redstone Repeater", otherwise translations must be provided in language files in resource packs), and the incorporation of scoreboard values into text. Use the /data merge block command to create or alter JSON signs.

Signs can post the success count of JSON text hover and click events to scoreboard objectives. The objectives to be used can be specified by running the /execute store command or by modifying the sign's NBT data directly with the /data merge block command.

Signs act as though they have a use action, so the player is unable to place blocks or use items while the cursor is pointed at them without sneaking.

Signs are removed and drop as an item when pushed by a piston (trying to pull them does nothing), except in Java Edition, where a sign causes the piston to not extend.

Signs have no collision mask (they are completely non-solid), so items and mobs can move through sign blocks. Other blocks (including other signs) can be placed on any edge of a sign.

Water and lava flow around signs. Lava can create fire in air blocks next to signs as if the signs were flammable, but the signs do not burn (and cannot be burned by other methods either, except in Bedrock Edition).

Wooden signs can be used as a fuel in furnaces, smelting 1 item per sign.

Signs can be placed under note blocks to produce "bass" sounds.

A sign has a block entity associated with it that holds additional data about the block.

The character limit for the Text tags depends on the width of the characters. Although the Text tags are string objects, they should contain JSON text which are evaluated as compound objects.

Issues relating to "Sign" are maintained on the bug tracker. Report issues there.