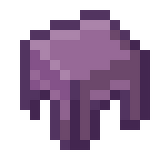 This article is about the item that drops from the mob. For the mob, see Shulker. For the storage block, see Shulker Box.

Shulker shells are items dropped by shulkers that are used solely to craft shulker boxes.

In Bedrock Edition, shulkers drop 0-1 shulker shells. The maximum can be increased by 1 per level of Looting, which is 0-4 shells with Looting III.

In Java Edition, shulkers have a 50% chance of dropping a shulker shell when killed. This is increased by 6.25% per level of Looting, for a maximum of 68.75% with Looting III.

Issues relating to "Shulker Shell" are maintained on the bug tracker. Report issues there.