A shovel is a tool used to quickly destroy certain types of blocks.

Shovels are designed for blocks of dirt, sand, gravel, snow, and grass. When a block is destroyed by a shovel, it will be left on the ground for any player to pick up. Crafting a shovel is not a requirement to progress in the game, but they are very useful to have, as they allow a player to destroy some blocks faster than with bare hands. All shovels degrade as they are used for their intended purpose. However, a shovel will lose durability at twice the rate if it is used to attack mobs. Shovels made with better materials will last longer. In addition, a shovel can be enchanted with useful qualities, such as Unbreaking and Silk Touch.

Shovels can be crafted out of the following materials (in order of lowest, to highest durability):

Place two sticks vertically, with either Wood, Stone, Iron, Gold or Diamond on the top. 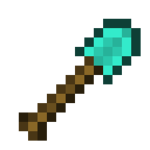 All shovels before 1.16
Add a photo to this gallery
Retrieved from "https://minecraft.fandom.com/wiki/Shovel?oldid=194185"
Community content is available under CC-BY-SA unless otherwise noted.