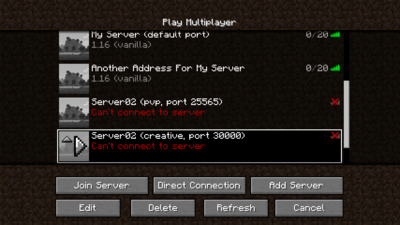 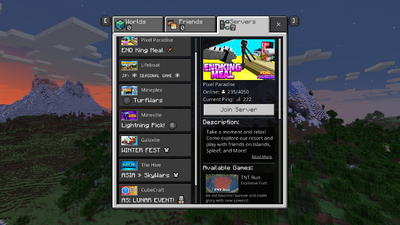 Minecraft includes an in-game server list for multiplayer in which users can save the servers they visit.

In Java Edition, there is no pre-populated server list directly available from in-game itself or on the official Minecraft website, but the stand-alone Java Edition launcher does support adding servers in the Multiplayer section. It allows players to see if a server is online, how many slots it has, and how good the player's connection (ping time) to the server is. Hovering over the connection status icon in Minecraft's server list tells the player the connection speed to the server.

When first loading up the multiplayer list, the player receives a warning regarding online play not being rated. If the player wishes not to see this again, there is a 'Do not show this screen again' checkbox.

In Bedrock Edition, the server list has a section for featured servers that have partnered with Mojang Studios. In the console versions, these are the only servers available, as there is no option to add unofficial servers.

Several websites provide a place for server owners to publicly advertise their servers, listing IP addresses and other information about these servers. There were two sites of note (both defunct): the official Classic server list maintained by Mojang Studios and the public server list at the Minecraft Forums.

In Bedrock Edition, the servers are always in order.