This article's name is unofficial.
An official name is yet to be given to the subject matter. Please add an official name when reliable sources confirm it.
This page describes content that exists only in outdated versions of Minecraft.
This feature used to be in the game but has since been removed.
Seamless Stone Slab 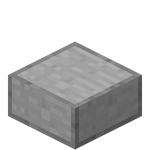 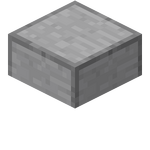 Seamless stone slab refers to several unused variants of the slab block with metadata exceeding that which was actually used at the time. They can be considered a precursor to smooth stone.

Seamless slabs were never intended to be obtainable by any means, and as such inventory editors are generally the most reliable method of obtaining them.

There exist methods of block transmutation which may be used to obtain seamless stone slabs, allowing them to exist in block form, and then be broken to collect them in item form.

Due to their nature of being extreme data values, and the fact that all of these data values eventually became used in-game, worlds containing the slabs that eventually used said values can be downgraded to obtain seamless slabs in an earlier version. This is, however, risky, and can cause crashes and world corruption.

Seamless stone slabs require a pickaxe to mine, dropping themselves when broken.

The use of a single texture on all sides is a trend which can be seen in many other extreme metadata variants: wood, which also eventually became obtainable intentionally, pistons and sticky pistons, hay bales, and Bedrock Edition-exclusive cases of chiseled quartz blocks, quartz pillars, purpur pillars and bone blocks. (Several other extraneous metadata variants, such as those of lit and unlit furnaces, dispensers, droppers, jack o'lanterns and pumpkins, the last of which also was reimplemented intentionally, used their texture on four sides, due to having a dedicated top and bottom and most being able to face in four directions.)

The following table lists all conversions in Java Edition:

This section is missing information about From the Smooth Stone page: "If hovered over the slabs with the mouse cursor in the inventory, whilst not holding other objects, it would try to load the name of the slabs, which resulted in crashing the game. Patched in 1.2.4" - did this ever happen, and if so, when?.
Please expand the section to include this information. Further details may exist on the talk page.

Seamless stone slabs are an issue, and due to their removal, can be considered already fixed.