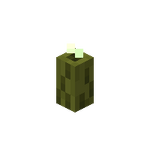 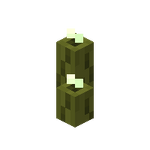 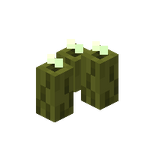 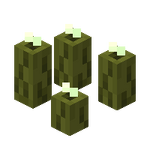 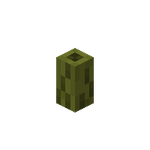 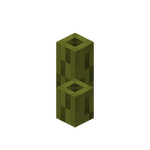 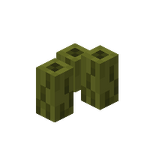 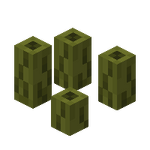 A sea pickle is a small block that emits light underwater, and is typically found in colonies of up to four sea pickles.

Sea pickles can be broken instantly. Each colony drops 1-4 sea pickles, depending on how many are in the colony (so a colony of 3 pickles drops 3 pickles).

Sea pickle colonies generate on the bottom of warm oceans and are found on top of coral blocks in coral reefs. Each chunk has 1⁄6 chance to generate sea pickle colonies. They can be found in groups of 1 up to 4.

Sea pickles may also be found in desert village houses as decorative blocks that resemble pottery.

Using bone meal on an underwater sea pickle placed on top of a living coral block creates more sea pickles. Specifically, the colony to which bone meal is applied increases in size, and any coral block within a radius of 2 blocks (rectilinear distance, horizontally from either the coral block or the sea pickle itself) can generate 1-3 sea pickles. They do not grow or spread naturally, and do not require light.

Sea pickles are sold by wandering traders for 2 emeralds.

Sea pickles can be placed on top of most solid blocks, as well as non-solid blocks, up to four per block, similar to turtle eggs or candles. More information regarding placement on transparent blocks can be found at Opacity/Placement.

Placing a sea pickle into a composter has a 65% chance of raising the compost level by 1.

Issues relating to "Sea Pickle" are maintained on the bug tracker. Report issues there.