Edit
watch 28:07
Minecraft Interactive Experience
Do you like this video?
Play Sound
This article is about the light block found underwater. For the light source item that can hang under blocks, see Lantern.
Sea Lantern 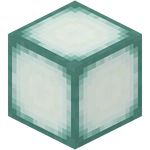 A sea lantern is an underwater light source that appears in ocean monuments and underwater ruins.

Each level of Fortune increases the maximum number of prismarine crystals dropped. The amount is capped at 5, so Fortune III simply increases the chance of getting 5 crystals.

Sea lanterns generate throughout ocean monuments, as well as in some ocean ruins.

Sea lanterns emit a light level of 15, the brightest possible light level in the game. They produce the same amount of light as glowstone, redstone lamps, jack o'lanterns, lanterns, beacons, conduits, and shroomlights.

Sea lanterns can be used to activate a conduit by building a structure around it. By doing this, the conduit emits the Conduit Power effect in a certain radius, depending on how many blocks are used to power it. Prismarine, dark prismarine, and prismarine bricks can also be used for this purpose.

Sea lanterns can be placed under note blocks to produce "Clicks and Sticks" sound.

The Sea lantern blocks all sunlight, players and mobs suffocate inside it, and it blocks a Beacon beam, preventing the Beacon's activation. However, like transparent blocks, it does not prevent the opening of chests, monsters (including Slimes) cannot spawn on it, and it does not transfer a redstone signal. This behavior also occurs in Glowstone.

Issues relating to "Sea Lantern" are maintained on the bug tracker. Report issues there.