Edit
This article is about the item used to craft turtle shell helmets. For the helmet, see Turtle Shell.
Scute 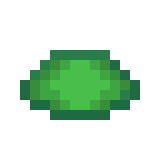 Scutes are items that baby turtles drop when they grow into adults. They can be used to craft turtle shells which can be used to brew the potion of the Turtle Master.

Baby turtles drop a single scute when they grow up into adults, which is the only way possible to obtain the item.

Scutes can be crafted into turtle shells.

Scutes are the repair items for the turtle armor material, and thus can be used to repair turtle shells in an anvil.

Expert-level cleric villagers have a 2⁄3 chance to buy 4 scutes for an emerald as part of their trades.‌[Java Edition only]

Expert-level cleric villagers have a 50% chance to buy 4 scutes for an emerald as part of their seventh trades.‌[Bedrock Edition only]

Expert-level leatherworker villagers buy 4 scutes for an emerald as part of their trades.

Issues relating to "Scute" are maintained on the bug tracker. Report issues there.