Edit
This article is about the status effect. For the hidden statistic closely linked to hunger, see Hunger § Mechanics.
Saturation 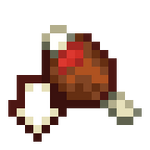 Saturation is an instant status effect that reduces the need for eating. It also prevents death by hunger if the player has no food.

All foods replenish food saturation, but none actually add the Saturation status effect, with the exception of suspicious stew crafted with a dandelion or blue orchid.

Issues relating to "Saturation" are maintained on the bug tracker. Report issues there.