Edit
watch 28:07
Minecraft Interactive Experience
Do you like this video?
Play Sound
This article is about normal saddles. For the removed horse saddle, see Horse Saddle.
Saddle 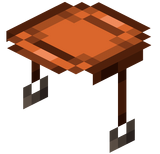 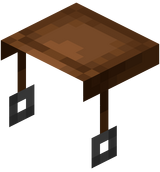 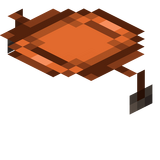 A saddle is an item that can be placed on rideable mobs.

Saddles can be obtained as a "treasure" item from fishing with a base chance (without fishing rod enchantments) of 0.8%.

Master-level leatherworker villagers have a 50% chance to sell a saddle for 6 emeralds as their trade.‌[Bedrock Edition only] This trade is always offered in Java Edition.

Any mob that the player equips with a saddle drops the saddle upon death.

A strider may spawn being ridden by a zombified piglin, which causes it to spawn wearing a saddle. This saddle has an 8.5% chance to drop, increased by 1% per level of Looting.

A ravager always spawns with a saddle and always drops the saddle upon death. Looting does not affect the drop.

Saddles can be used to ride striders, horses, donkeys, mules, skeleton horses, and pigs. An equine mob equipped with saddle is rendered wearing a bridle along with the saddle. These animals can also be equipped by a dispenser with saddles in it.

Although ravagers are equipped with saddles and sometimes ridden by other mobs, the player is unable to ride ravagers.

Using a saddle on a pig equips the pig with the saddle, allowing the player to ride the pig. Controlling the pig requires using a carrot on a stick. Killing the pig is the only way to retrieve the saddle. Striders behave similarly when equipped with a saddle, but require a warped fungus on a stick to be controlled instead.

Tamed horses, donkeys, and mules can be ridden without a saddle, but a saddle is required to control them. Once tamed, they can be equipped with a saddle by placing it in their inventory, which can be opened by pressing use while holding a saddle or sneaking. The saddle can be unequipped by removing it from the specific inventory slot.

This section would benefit from the addition of isometric renders.
Please remove this notice once you've added suitable isometric renders to the article.
The specific instructions are: isolated saddles in 1.13 dev

Issues relating to "Saddle" are maintained on the bug tracker. Report issues there.