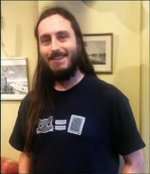 Ryan Holtz is a former game developer at Mojang Studios who worked on the rendering engine of Minecraft. His employment at Mojang was announced on November 2, 2013 at the "Future of Minecraft" panel at MINECON 2013.[11] His first day at the Mojang office was November 18, 2013.[12]

Holtz is from Buffalo, New York.[13] In his early teens, he was diagnosed with autism. He says he "technically [has] "Autism Level 1" according to the DSM-V, which is the new name for Asperger's."[14]

Holtz is a graduate of East Tennessee State University in computer science,[1] who has been involved in the video game industry since 2005.[11] He started his career at EA Tiburon working on Superman Returns, then later for Activision at Vicarious Visions working on the Guitar Hero series.[1][15]

Holtz is well known for his Minecraft mods, which he posted on the Minecraft Forums under the name UltraMoogleMan.[11][16] His modding led to talks with Markus Persson about the implications of increasing Minecraft's then world height of 128.[17]

On January 29, 2015, Holtz announced on his Twitter page if anyone knew of any game studios in Stockholm that are hiring.[18] While the tweet did not make it clear whether or not this was the truth or simply a joke, the employees page on the Mojang Support website no longer stated him as a game developer.

On February 8, 2015, Mojang confirmed Holtz is no longer an employee,[19] but did not release a formal announcement about it.

On April 1, 2015, Holtz announced that he was hired by King to help develop Candy Crush Soda Saga.[20] He confirmed that it was not a joke the next day.[21]