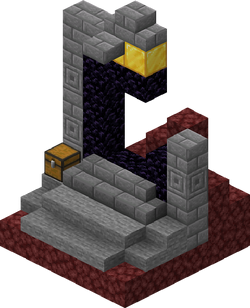 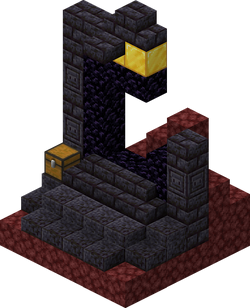 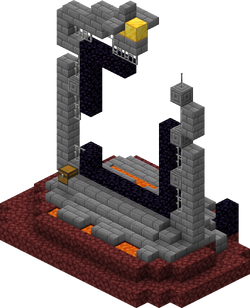 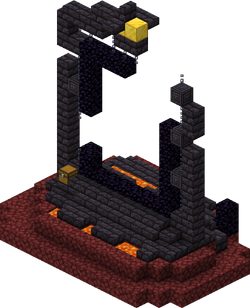 A ruined portal is a naturally generated damaged nether portal, which spawns in both the Nether and the Overworld. It contains some decoration and a loot chest around it.

Ruined portals that generate underground do so at Y-level from 15 to n−n2, where n is the highest block at the point of generation and n2 is the height of the ruined portal structure. This means the terrain is always higher than or level with the top of the structure. Some ruined portal variants are short enough to generate completely on the surface.

Ruined portals that generate in windswept hills generate at y-level from 70 to n−n2.

Ruined portals that generate partially buried do so at y-level n−n2, plus a random integer from 2 to 8. This means that the structure has 2 to 8 layers raised above the surface.

Many blocks in ruined portals are replaced upon generation. A ruined portal is in a snowy biome if the temperature is less than 0.15.

Ruined portals generate incomplete portal frames composed of obsidian and, sometimes along with crying obsidian, although nether portals cannot be activated with crying obsidian in the frame.[1] Some frames generate flat on the ground, as if they toppled over. Others are free-standing separately, as if still being assembled/attached.

All ruined portals generate with a chest on Bedrock Edition, but on Java Edition the chest may be replaced if terrain overrides it. Each chest contains various golden items and items used to build portals such as obsidian and flint and steel.

Any ruined portal generated in the Overworld is surrounded with structures made of stone, stone bricks, and iron bars; in the Nether it is surrounded by blackstone variants and chains.

Currently there are 13 variants: 10 normal size portals and 3 giant portals in varying states of decay.

Note that some blocks can be replaced with others (such as crying obsidian) upon generation. A full list can be seen below.

Most ruined portal structures contain enough obsidian to make a complete portal, although in the smaller portals, there may not enough because each obsidian has a 15%‌[JE only] or 20%‌[BE only] chance to be replaced by crying obsidian.

Issues relating to "Ruined Portal" are maintained on the bug tracker. Report issues there.