Edit
watch 28:07
Minecraft Interactive Experience
Do you like this video?
Play Sound
Not to be confused with Dirt or Coarse Dirt. For other uses, see Dirt (disambiguation).
Rooted Dirt 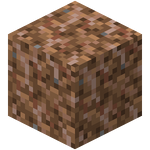 Rooted dirt can generate under azalea trees. This may continue for more than a stack mainly-vertically downward under the trunk base/stump.

Rooted dirt can be mined with any tool or without a tool.

Much like coarse dirt, neither mycelium nor grass can spread onto rooted dirt.

While it yields itself when dug, it does not convert into dirt after a block is placed onto it.

Rooted dirt blocks can be converted into dirt path blocks by using any type of shovel on the side or top of rooted dirt with air above it.

Using bone meal on rooted dirt causes hanging roots to grow below the block, if space is available for it to grow.

Using a hoe on rooted dirt turns it into normal dirt and drops a hanging roots item.

Its sound is between that of wooden planks and dirt variants.

Issues relating to "Rooted Dirt" are maintained on the bug tracker. Report issues there.