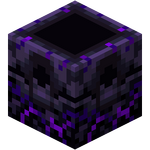 The respawn anchor is a block that allows players to set their spawn point in The Nether.

Respawn anchors can be harvested with any pickaxe at or above diamond tier (diamond/netherite). In Bedrock Edition, if harvested with a tool enchanted with Silk Touch, the respawn anchor keeps its current level of charges. This also works with the creative Pick Block option, and it is unique in the fact that this does not work on blocks with different states like the redstone lamp or daylight sensor.[1]

While the ingredients to craft a respawn anchor are all native to the Nether, they are also obtainable in the Overworld: glowstone can be obtained from trading with villagers or wandering trader, or crafted from glowstone dust dropped by witches; crying obsidian can be found in ruined portals and obtained with piglin bartering.

The respawn anchor is used to respawn in the Nether, even if the player leaves the Nether. Once the block is charged, it can be used to set the player's respawn location.

When crafted, a respawn anchor has no (zero) charge and can't yet be used until charged. When a glowstone block (not glowstone dust) is used with it, a charge is added, the texture of the block changes, and it starts emitting a light level of 3. Up to four glowstone blocks can be used to charge the anchor. The charge is indicated by a dial on the side of the block. Each additional piece of glowstone after the first increases the light level by four, up to a maximum of 15.

To set the player's spawn location to the respawn anchor they must right click on it, just like one does with a bed, and the Anchor must at least have one charge at the time of the click. A confirmation appears when the player's respawn location is set. Other players can also set their respawning to the same respawn anchor. Each respawning uses up one charge, even if used by another player.

Upon death, the player respawns next to the anchor, and its charge is decremented. If a player's respawn anchor is destroyed, or its charges have been exhausted, or if the area around it is made unsuitable for respawning, a message appears saying "You have no home bed or charged Respawn Anchor, or it was obstructed", and the player respawns at the world spawn point. Returning through an End portal is not counted as a respawn against the charges.

A respawn anchor can be shared among several players. When shared, remaining charges are shared as well. In Hardcore mode, the respawn anchor does not resurrect the player, but may still teleport them and consume charges.

If the player attempts to set their spawn at a charged respawn anchor in the Overworld, the End, or custom dimensions in which they are disabled, the block explodes (and is destroyed) similar to when a bed is used in the Nether or the End. The explosion has a power of 5 and sets fire to surrounding blocks.

The respawn anchor can also be charged with a dispenser.

The respawn anchor cannot be pushed by a piston.

Hoglins run away from respawn anchors.

Respawn anchors can be placed under note blocks to produce the "bass drum" sound.

Issues relating to "Respawn Anchor" are maintained on the bug tracker. Report issues there.