For other redstone-related objects found in Minecraft, see Redstone (Disambiguation).

Redstone Wire is placed by right-clicking on the surface of a block while Redstone dust is selected in the hud. Players can remove it by left-clicking on the wire which will break it like any other block. It will drop reusable Redstone Dust when destroyed. Redstone wire will transfer power provided either by Redstone Torches or by switches, such as Levers, from block to block. It can be connected to other wires which will create circuits; however, it will not try to form automatic connections with blocks or items that "receive" power, such as doors. These blocks need a straight wire that runs to or onto them in order for them to receive power. Redstone wire cannot be placed on glass or glass panes. 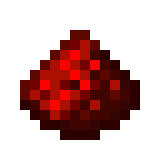 Redstone.
Add a photo to this gallery
Retrieved from "https://minecraft.fandom.com/wiki/Redstone_Wire?oldid=220634"
Community content is available under CC-BY-SA unless otherwise noted.