For other redstone-related objects found in Minecraft, see Redstone (disambiguation).

A Redstone torch is a light-emitting block, similar to a regular Torch, except dimmer. Since it is a Redstone-device, it can also serve some additional functions.

When placed on its own, a Redstone torch looks like a glowing red torch, although noticeably dimmer than a normal Torch. However, it can't melt Ice or prevent mob-spawning like a normal torch, nor does it does not have the usual fire animation.

A Redstone torch can provide a power source for Redstone Wires. Wires, in turn, are used to operate doors, pistons, or any Redstone-effected block from a distance. The torch can power wire from up to 15 blocks away and takes one Redstone tick (two-game ticks, or 0.1 seconds) for power to flow through it. The torch gives off a Redstone current on all four sides, and if there is a block above it, it will give a signal two blocks above on the block above it.

A Redstone torch can be crafted by combining one piece of Redstone with a Stick. 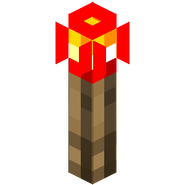 The redstone torch on Bedrock Edition.
Add a photo to this gallery
Retrieved from "https://minecraft.fandom.com/wiki/Redstone_Torch?oldid=208852"
Community content is available under CC-BY-SA unless otherwise noted.