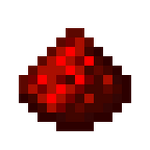 Redstone dust is a mineral that can transmit redstone power when placed as a block.

Redstone dust can be broken instantly using any tool, or without a tool, and drops itself as an item.

Redstone dust is removed and drops as an item if:

Witches have a chance of dropping 0–2 redstone dust upon death. This is increased by 1 per level of Looting, for a maximum of 0–5 redstone dust.

Redstone dust can be crafted from blocks of redstone.

Clerics may give redstone dust to players with the Hero of the Village effect.

Redstone dust is used for brewing, crafting, and in redstone circuits by placing it on the ground to create redstone wire. It can also be used to power redstone components.

When placed in the world, redstone dust becomes a block of "redstone wire", which can transmit redstone power.

Redstone dust can be placed on opaque blocks as well as glowstone, upside-down slabs, glass, upside-down stairs, and hoppers. It can also be placed on some transparent blocks; see Opacity/Placement for more information. It cannot be placed suspended in midair, even with commands, which is not unintentional.[1]

In Bedrock Edition, redstone wire automatically configures itself to point toward adjacent blocks or mechanism components. In Java Edition, it does not. If such a configuration is desired, the other neighbors of the redstone wire must be arranged to create it, i.e the redstone dust must be placed in a way that it would be pointed at the block’s location even if it were not there.

When redstone wire is reconfigured after placement, it does not update other redstone components around it of the change unless that reconfiguration also includes a change in power level or another component provides an update. This can create situations where a mechanism component remains activated when it shouldn't, or vice versa, until it receives an update from something else – a "feature" of redstone wire that can be used to make a block update detector.

Redstone wire can transmit power up to 15 blocks.

Power level drops by 1 for every block of redstone wire it crosses. Thus, redstone wire can transmit power for no more than 15 blocks. To go further, the power level must be re-strengthened – typically with a redstone repeater.

Powered redstone wire on top of, or pointing at, an opaque block provides weak power to the block. A weakly-powered block cannot power other adjacent redstone wire, but can still power redstone repeaters and comparators, and activate adjacent mechanism components. Transparent blocks cannot be powered.

Since Java Edition 1.16, while redstone wire always provides power to the directions it points into, it can still point into directions in which it cannot give power. If redstone wire comes in the from of a cross, the player can right-click to toggle it between a cross and dot. A redstone dot does not power anything adjacent to it, but powers the block under it.

Note: These videos do not show all uses for redstone in crafting and all methods of obtaining. This video is also outdated, as of 1.13 Java Edition, redstone is now called Redstone Dust.

This section is missing information about when could it extend Slow Falling?.
Please expand the section to include this information. Further details may exist on the talk page.

Main article: Direct item forms of blocks
This section is missing information about
Please expand the section to include this information. Further details may exist on the talk page.

Issues relating to "Redstone", "Redstone dust", or "Redstone wire" are maintained on the bug tracker. Report issues there.