Edit
watch 28:07
Minecraft Interactive Experience
Do you like this video?
Play Sound
This article is about the item. For the mob, see Salmon.
Raw Salmon 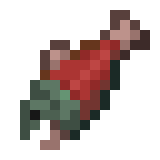 Raw salmon is a food item.

Guardians and elder guardians have a 2.5% chance of dropping a random fish upon death. This has a 25% chance of being raw salmon. The chance of getting the fish drop can be increased by 1% per level of Looting, but the type of fish is not affected.

Polar bears have a 25% chance to drop 0–2 raw salmon when killed. The maximum amount can be increased by 1 per level of Looting, for a maximum of 0-5 with Looting III.

Salmon always drops 1 raw salmon in its item form when killed. If the salmon is killed while on fire, then it drops cooked salmon instead.

in Java Edition, Fisherman villagers throw raw salmon at players under the Hero of the Village effect.

A dolphin can be fed raw salmon to increase its trust of the player and cause it to interact with the player more often. However, unlike most other animal mobs, this does not cause them to breed.

Additionally, dolphins swim to the nearest chest in a shipwreck or underwater ruin after they are fed raw salmon. If the chest in the nearest structure is broken, they swim to another structure with a chest.

Apprentice-level Fisherman villagers have 50%‌[Bedrock Edition only] or 2⁄3‌[Java Edition only] chance to buy 6 raw salmon and one emerald for 6 cooked salmon.

In Bedrock Edition, raw salmon can be fed only to wolves not at full health, healing them by 2

. Unlike other wolf food, raw salmon cannot be used to breed wolves or to accelerate the growth of baby wolves.

Issues relating to "Raw Salmon" are maintained on the bug tracker. Report issues there.