Raw rabbit is a food item that replenishes

Raw rabbit can only be obtained by killing a rabbit. 0-1 pieces of meat are dropped from a rabbit each time one is killed. 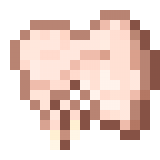 The old texture of the Raw Rabbit.
Add a photo to this gallery
Retrieved from "https://minecraft.fandom.com/wiki/Raw_Rabbit?oldid=191069"
Community content is available under CC-BY-SA unless otherwise noted.