Edit
watch 28:07
Minecraft Interactive Experience
Do you like this video?
Play Sound
For the mob in Minecraft Dungeons, see MCD:Ravager.
Ravager 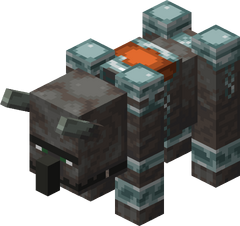 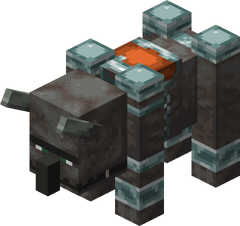 Ravagers spawn starting at wave 3 as part of a raid.

Ravagers can be summoned with riders by using spawn event command. For example: /summon ravager ~ ~ ~ minecraft:spawn_with_pillager_rider.

Upon being killed, a ravager drops:

Ravagers drop the most amount of experience orbs out of all non-boss entities, being tied with the piglin brute.

Ravagers are hostile toward players, iron golems, adult villagers, and wandering traders within a 32-block radius. They attack by ramming enemies with their head, dealing a knockback of 5 blocks. Ravagers also attack by opening and closing their mouths, similar to biting their target.

They can also destroy certain block types by charging into them. In Java Edition ravagers can break only leaves and crops. In Bedrock Edition they can break leaves, all crops, any other non-tree plants, mushrooms, and turtle eggs. Here is a complete list:

Although ravagers are equipped with saddles, they cannot be ridden by the player. Ravagers can be ridden only by an illager.

In Bedrock Edition Ravagers will have delayed hits hit_delay_pct: 0.5 And when set to 0.0 Ravager hits wouldn't be delayed to match Java Edition.

When blocked by a shield while attacking, no damage is dealt and knockback is halved. The ravager also has a 50% chance to become stunned and unable to move or attack for 2 seconds. After this period, it emits a roar by opening its bottom jaw and closing it and that deals 6

damage and a knockback of 5 blocks to nearby entities. The roar knocks back nearby illagers without damaging them and has no effect on other ravagers. Illagers that are knocked back by the ravager's roar can still take fall damage.

The ravager does not attack pillagers who shoot at it by accident and does not attack evokers when evoker fangs accidentally hit a ravager. When a vindicator on a ravager has been named "Johnny" it might attack the ravager while it is riding it ‌[Java Edition only] but the ravager does not attack the vindicator for any reason. When a ravager gets shot by a mob that battles with a projectile while it is attacking the player, the ravager first attempts to kill who shot it, then goes back to attacking the player once the deed is done. Any mob that doesn't battle with projectiles requires ravagers to roar in order to have a hit on them.

Even though they are heavy, ravagers can swim. Their apparent weight makes them take 50% less of knockback. A ravager being ridden by an illager dismounts its rider if it moves into water 2 blocks deep.

In Java Edition, any ravager can join a patrol if sufficiently near a patrol captain.

Ravagers have entity data associated with them that contains various properties.

Issues relating to "Ravager" or "Illager beast" are maintained on the bug tracker. Report issues there.

This section would benefit from the addition of isometric renders.
Please remove this notice once you've added suitable isometric renders to the article.
The specific instructions are: Ravager raiders with Java edition legs texture.