It has been suggested that this page be merged with Human. [discuss]
If this merge affects many pages or may potentially be controversial, do not merge the page until a consensus is reached.
Reason: This mob is actually the same mob as the Human, just that the model was changed during Indev before becoming the Human again. (The Human page itself is pending a split, though, so it'd be better to wait and then merge this into either Mob or Monster, depending on which entity it corresponds to.)
This page describes content that exists only in outdated versions of Java Edition.
This feature used to be in the game but has since been removed.
Rana 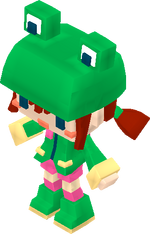 Rana was a passive mob that existed for the majority of Java Edition Indev 0.31.

Rana spawned randomly in the world in groups with other Ranas. They could spawn at any light level as long as there was enough space.

Rana was a passive mob. It had no animation, so it aimlessly glided and jumped around the world in the same, still pose, and never stopped moving around. Rana, along with Beast Boy, Steve, and Black Steve acted in this identical manner. Depending on the version, upon death, Rana would not fall over to the ground or flash red or white and appear to die, as most mobs do. It would just disappear shortly thereafter, and drop no items or the items it was designated to drop.