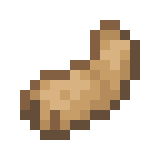 A rabbit's foot is a brewing item obtained from rabbits.

Each rabbit has a 10% chance to drop a rabbit's foot when killed by the player. This chance can be increased by 3% per level with a sword enchanted with Looting.

A fox sometimes spawns with a rabbit's foot in its mouth, which always drops upon death. Alternatively, the player can drop a food item, which causes the fox to drop the rabbit's foot.

A tamed cat has a 70% chance of giving the player a gift when the player wakes up from a bed, and the gift has a 16.13% chance to be a rabbit's foot.

Issues relating to "Rabbit's Foot" are maintained on the bug tracker. Report issues there.