Edit
watch 28:07
Minecraft Interactive Experience
Do you like this video?
Play Sound
This article is about the mob. For other uses, see Rabbit (disambiguation).
Rabbit 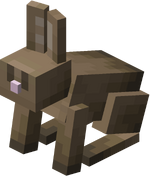 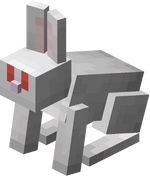 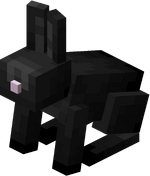 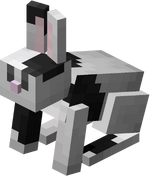 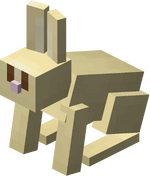 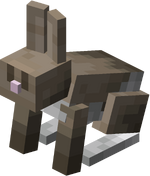 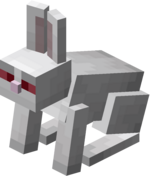 Rabbits spawn above grass, snow blocks or sand. They generate individually after the generation of the world.

Creamy rabbits are the most common rabbit color and are found only in deserts and its variants. White and black and white rabbits are also quite common and spawn in snowy biomes such as snowy taigas, snowy plains, groves and snowy slopes. Default rabbit colors such as brown, black and salt and pepper spawn naturaly in flower forests, taigas and meadows, but can also spawn in any other non-snowy biome via spawn eggs, commands, spawners or breeding. In all these places, groups of an adult and one to two babies spawn.

In Java Edition, rabbits can also be found in giant tree taigas.

Rabbits hop around aimlessly instead of walking. They can jump up almost 2 blocks in height. They slowly approach players holding carrots, golden carrots or dandelions within 8 blocks. Rabbits also jump off of cliffs to reach carrots but do not go into lava for them. They randomly flee around if attacked. All non-hostile rabbits avoid players within 8 blocks and avoid most hostile mobs within 4 blocks (except slimes, magma cubes, and ghasts). They also avoid wolves within 10 blocks.

Despite its hostile nature, killer bunnies can breed with other rabbits and with each other, having the unusual chance of creating a baby killer bunny.

Only Bedrock Edition and Education Edition baby rabbits follow their parents. This is because the behavior of parent following is not intended to occur in Java Edition.[1]

If it cannot find a player, the killer bunny actively seeks out and attacks any foxes or wolves, including tamed wolves. These mobs, in return, attack the killer bunny, leading to a vicious fight.

This rabbit is the skin of user xyzen420's girlfriend's missing rabbit, which Ryan Holtz implemented as a memorial.[2]