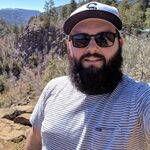 Quinn Richter is an Associate Producer at Mojang Studios, working as Head of the Minecraft Marketplace Program.

Quinn was first introduced to Jesse Merriam (Executive Producer, Minecraft) at a DigiPen 'career fair'[1], the institute at which he had previously graduated[2]. At the time, Mojang was seeking a producer for "first-party DLC" on Minecraft: Pocket Edition (later Bedrock Edition). After expressing interest in the role, Quinn received an interview and was eventually hired in May 2016[3]. His initial involvement focused on the collaboration with 4J Studios to publish the first DLC on the platform, which later provided the framework to implement the Minecraft Marketplace.