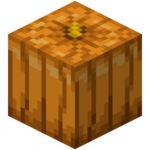 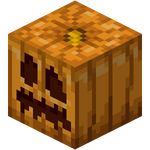 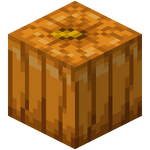 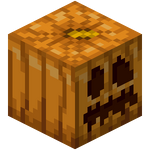 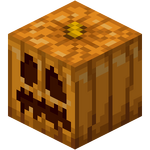 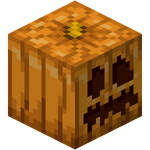 A pumpkin is a fruit block that appears in patches in grassy biomes. Pumpkins have the same texture on all 4 sides.

A carved pumpkin is a carved version of a pumpkin that can be worn or used to spawn golems. It can be made by using shears on a pumpkin placed in the world.

Pumpkins naturally generate with the terrain in most biomes in the Overworld, in the form of random patches. They require only grass blocks with air above (clear of any plants such as flowers or grass), and can generate whether or not that grass block has a layer of snow cover. Practically speaking, this means that the occurrence of pumpkins in stony or sandy biomes, or in grassy biomes with few clear grass blocks, is comparatively rare. Each chunk has a 1⁄32 chance to generate a pumpkin patch, making naturally-generated pumpkins rarer than diamond ore.

Pumpkins generate naturally in taiga and snowy taiga‌[BE only] villages, replacing the hay bales that normally generate in other villages.

Carved pumpkins generate in rail rooms in woodland mansions, as well as in pillager outposts as a part of scarecrows.

Pumpkins can be mined using any tool, but axes are the quickest way.

When a pumpkin is pushed by a piston, it breaks and drops as an item. It cannot be pulled.

Wandering traders can sell a pumpkin for one emerald.

When placed, a carved pumpkin automatically faces the player.

Pumpkin farming strategies parallel those of melons. Planted pumpkin seeds grow a central stem that, after maturing, generates pumpkins randomly on adjacent vacant dirt/grass/farmland/podzol/coarse dirt/moss block. If a pumpkin is harvested without also cutting the central stalk, another pumpkin generates afterward without requiring replanting or waiting for the stalk to mature again. If a carved pumpkin is desired, simply use the shears on the pumpkin on the ground, and then harvest it as normal.

Pumpkin stems take around 10 to 30 minutes to fully develop. They require a light level of 9 or higher to grow. Bone meal can be used on pumpkin stems to become fully-grown, but this does not produce a pumpkin immediately.

A carved pumpkin can be equipped as a helmet without any actual armor value. When worn, it limits the player's viewing area to a mask pattern that resembles the pumpkin's carved face. The pattern does not appear when using third person view (F5 key). It also doesn't appear when toggling the HUD (F1 key)‌[Java Edition only].

A player wearing a carved pumpkin does not aggravate endermen when looking at them.

Dispensers can equip a carved pumpkin on a player, mob or armor stand with an empty helmet slot, within the block the dispenser is facing. It can also place the carved pumpkin as a block, if a snow or iron golem can be spawned after the pumpkin is placed.

Apprentice-level Farmer villagers buy 6 pumpkins for an emerald as part of their trades.‌[Bedrock Edition only]

Apprentice-level Farmer villagers have a 2⁄3 chance to buy 6 pumpkins for one emerald.‌[Java Edition only]

Carved Pumpkins can receive the following enchantments, but only through an anvil.

Placing a pumpkin or carved pumpkin into a composter has a 65% chance of raising the compost level by 1.

Pumpkin can be placed under note blocks to produce didgeridoo sounds. This doesn't apply to carved pumpkins.[2]

This section is missing information about when were pumpkins changed to face away from the player upon placement? there were multiple such times (once in beta and once in 1.8 dev).
Please expand the section to include this information. Further details may exist on the talk page.