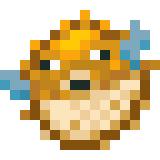 A pufferfish is a poisonous type of fish that is used to brew water breathing potions.

Pufferfish can be obtained through fishing. The pufferfish catch rate can be increased by Lure, which reduces wait time generally.

In Bedrock Edition, pufferfish can be caught only when fishing outside jungle biomes and its variants (i.e. everywhere except in jungles).

Pufferfish always drop 1 pufferfish in its item form when killed.

Master-level fisherman villagers buy 1~4‌[BE only] or four‌[JE only] pufferfish for an emerald.

In Bedrock Edition, pufferfish can be used to feed a wolf, healing it by 1

Issues relating to "Pufferfish (item)" are maintained on the bug tracker. Report issues there.