Edit
watch 28:07
Minecraft Interactive Experience
Do you like this video?
Play Sound
This article is about the mob. For the food item, see Pufferfish (item). For the mob in Minecraft Dungeons, see MCD:Pufferfish.
Pufferfish 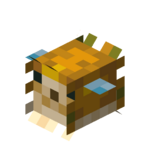 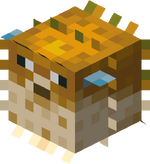 Pufferfish are passive mobs found in oceans. They defend themselves by dealing damage and inflicting poison to nearby players (if not in Peaceful difficulty) and certain mobs.

In Java Edition, pufferfish spawn in groups of 1-3 in warm, lukewarm and deep lukewarm ocean biomes, subject to fish spawning requirements. If trying to spawn inside a waterlogged solid block, the pufferfish uses the bigger "puffed" size to determine if it collides with anything solid.

In Bedrock Edition, fish spawn underwater at around 12–32 blocks away from the player in groups of 3–5 in warm ocean biomes, and only on the surface; that is, there must not be a spawnable block above the spawn location with a non-solid block on top.

Pufferfish drop 1 of their item form when killed:

Pufferfish inflate themselves when approached by the player, most mobs, ‌[JE only] and armor stands.[1]

The player may collect a fish by using a water bucket on it, giving the player a bucket of pufferfish. Fish placed with buckets do not despawn naturally. When that fish bucket is used against a block, it empties the bucket, placing water with that fish swimming in it. An empty bucket may be used as well.‌[Bedrock Edition only]

Like other fish, pufferfish cannot survive out of water. Outside of water, they flop around like guardians for a while until they start suffocating, and then die like squid. In Bedrock Edition they rotate when flopping. Fish cannot swim or breathe in cauldron water.[2]

A pufferfish inflates when approached by a player in Survival or Adventure mode, a drowned, an axolotl, or any non-water mob within a 5×5×5 volume around the fish, going from unpuffed, then semi-puffed, to fully puffed. Pufferfish are technically passive mobs but going near one when semi-puffed or fully puffed inflicts the player/mob with three or six seconds of Poison based on the inflation level, and touching one in its puffed or semi-puffed form deals damage separate from the poison.

Pufferfish also instantly inflate to their fullest form after taking any kind of damage.‌[Bedrock Edition only] After inflating, they slowly deflate to their normal shape as long as a threat is out of range. If the player/mob leaves the radius while pufferfish is in its semi-puffed stage, it deflates back to normal.

Undead mobs are unaffected by the poison effect, but still take damage when they come into contact with pufferfish.

A pufferfish inflicting damage to a mob other than creeper and ghast via touching provokes that mob to retaliate.

In Peaceful difficulty, pufferfish do not inflict damage or poison to player.

This page would benefit from the addition of more sounds.
Please remove this notice once you've added suitable sounds to the article.
The specific instructions are: check if idle sound event (likely empty) exists

This section would benefit from the addition of isometric renders.
Please remove this notice once you've added suitable isometric renders to the article.
The specific instructions are: 1.16-pre3 pufferfish changes - document old appearances in history

Issues relating to "Pufferfish" are maintained on the bug tracker. Report issues there.