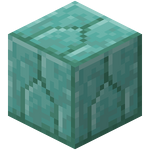 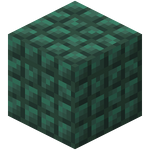 Prismarine is a type of stone that appears underwater in ruins and ocean monuments. It periodically changes color between blue and green.


Dark prismarine is a decorative form of prismarine; it is dark green, with a tight grid pattern.

Prismarine only drops itself when mined with a pickaxe. If mined by any other tool, it drops nothing.

Each type of prismarine can be crafted using varying amounts of prismarine shards (and an ink sac‌[Bedrock and Education editions only] or black dye in the case of dark prismarine). All of these resources can be obtained from underwater mobs.

Prismarine can be used for decoration or as a high blast resistance building block.

The normal prismarine is uniquely useful for decoration as it has an animated texture. The cracks in prismarine slowly cycle in color through light blue, green, purple, and dark blue. The full animation for the prismarine texture changes color 22 times in an irregular sequence before the whole pattern repeats; this takes 5 minutes and 30 seconds.

Prismarine, dark prismarine and prismarine bricks can be used to activate a conduit by building a structure around it. By doing this, the conduit emits the "Conduit Power" effect in a certain radius, depending on how many blocks are used to power it. Sea lanterns can also be used for this purpose.

All types of prismarine can be placed under note blocks to produce "bass drum" sound.

Issues relating to "Prismarine", "Prismarine Bricks", or "Dark Prismarine" are maintained on the bug tracker. Report issues there.