Edit
watch 28:07
Minecraft Interactive Experience
Do you like this video?
Play Sound
This article is about the powered rail. For other types of rails, see Rail (disambiguation).
Powered Rail 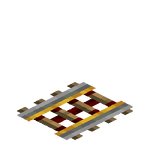 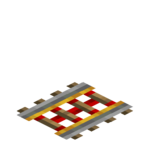 A powered rail is a type of rail that is used to increase or decrease the velocity of moving minecarts.

A powered rail also drops as an item when the block beneath it is removed or a piston moves it into a space with no floor below it.

A powered rail can be used as a rail and as a redstone component.

It cannot be placed suspended in midair, even with commands, which is not unintentional.[1]

Powered rails can be used to affect the speed of minecarts that travel over them.

A powered rail is a redstone mechanism and can be activated by:

Powered rails cannot increase the speed of a minecart to more than 8 blocks per second on either the north-south or east-west axis. The speeds that can be achieved with varying numbers of powered rails or intervals of normal rails between powered rails is complex -- for a thorough discussion, see Tutorials/Minecarts.

Issues relating to "Powered Rail" are maintained on the bug tracker. Report issues there.