Edit
watch 28:07
Minecraft Interactive Experience
Do you like this video?
Play Sound
For the fatal effect in Bedrock Edition, see Fatal Poison. For the effect in Minecraft Dungeons, see MCD:Poison.
Poison 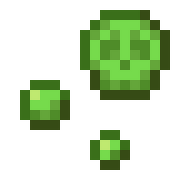 Poison inflicts damage over time, reducing the player's health to 1 (

), but cannot kill. It can be received from various mobs and items.

It can be cured by drinking milk, honey or antidote.‌[BE & EE only]

The amount of damage inflicted to the affected entity is shown in the table below:

The damage stops when the affected entity is at 1 (

) health, but can resume if healing occurs and the affected entity is at more than 1 (

) health before the effect expires.

Amplifiers outside the range 0–31 (corresponding to levels 1–32) are treated modulo 32 (as though reduced by 32 until they are within the range, or alternatively as the remainder from division by 32, i.e. 33 or 65 is treated as 1).

The effect can be removed by drinking milk or honey. In Education and Bedrock editions when education options are enabled, drinking antidote also removes poison.

Boss mobs, undead mobs, spiders, and cave spiders are unaffected by Poison. Witches are 85% resistant to damage from Poison in Java Edition and fully immune in Bedrock Edition.

Issues relating to "Poison" are maintained on the bug tracker. Report issues there.