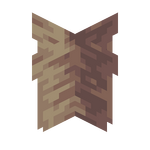 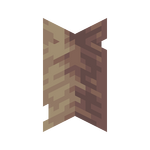 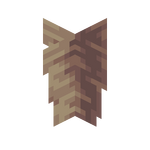 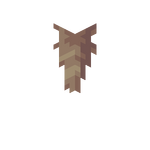 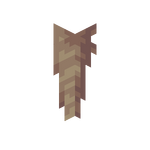 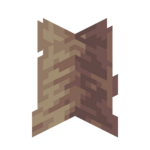 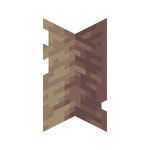 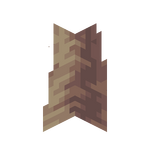 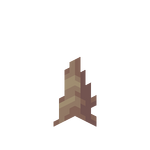 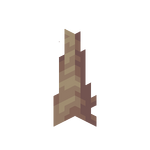 Pointed dripstone is a block that makes up stalactites and stalagmites.

Pointed dripstone can be found in dripstone caves. They are also found in small clusters inside ordinary caves.

Every random game tick there is a small chance of 1.138% (64⁄5625) for a stalactite or stalagmite to grow one block, meaning that every single growth step takes an average time of 5 in-game days (100 minutes).

Stalactites are created when pointed dripstone is placed on the bottom of a block.

Stalactites less than 11 blocks tall passively drip water particles (or lava particles in the Nether) in the absence of a liquid source, but these particles do not fill cauldrons. A waterlogged pointed dripstone at the tip of a stalactite does not produce drip particles. Waterlogging other parts of the stalactite does not affect the dripping.

If the block supporting a stalactite or any block of the stalactite is broken, all of the unsupported pointed dripstone below the broken block drops, causing damage to any player and mobs standing beneath it, similar to a falling anvil. The amount of damage is 2

for each block of falling distance after 2 blocks. The damage is capped at 40

× 20, no matter how far the stalactite falls. Wearing a helmet reduces the damage by 1⁄4, but this costs durability on the helmet. When a player dies by a stalactite falling on them, the death message "<player> was skewered by a falling stalactite" appears. However, if a player is merely touched by a falling stalactite entity, no damage is dealt unless the stalactite hits the ground in the same block where the player is located. Stalactites with multiple pointed dripstone can cause multiple damage; however, damage immunity prevents most of the damage from additional blocks.

When the uppermost block of a stalactite less than 11 blocks tall gets randomly ticked, it checks for a water source or waterlogged block two blocks above it and a cauldron within 10 blocks under the tip with no non-air blocks in between. If both conditions are satisfied, there is a 45⁄256 (~17.6%) chance for it to drip water and fill the cauldron by one level. If there is a lava source above the stalactite, there is a 15⁄256 (~5.9%) chance for it to completely fill an empty cauldron with lava instead, making lava a renewable resource. Refilling a cauldron with water or lava averages nearly one Minecraft day (19+ minutes) although the actual time for any individual refill varies.

Stalagmites are created when pointed dripstone is placed on the ground.

Falling onto stalagmites multiplies the fall distance by two to calculate the total amount of fall damage, using the formula ceil(fall_distance × 2 − 2). Note that the distance traveled during the last game tick of falling time is not included in this calculation, making it slightly off at higher distances; see Damage § Fall damage for more information.

If a player dies from falling onto a stalagmite, the death message "<player> was impaled on a stalagmite" appears.

All mobs that are immune to fall damage do not take damage from falling into stalagmites, the same applies to the player if the game rule fallDamage is set to false.[1][2]

Dripstone columns can be found naturally in dripstone caves, they are formed when stalactites and stalagmites join together in mid-air.

If mud‌ is placed above a block with a stalactite underneath, it eventually turns into clay.‌[upcoming: JE 1.19]

Issues relating to "Pointed Dripstone" are maintained on the bug tracker. Report issues there.