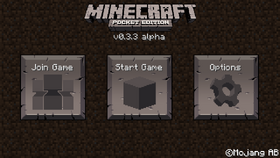 v0.3.3 alpha was a minor update to Minecraft: Pocket Edition that was released on August 9, 2012.[1] It added notable features such as new mobs (spiders and skeletons), new items, as well as other changes and fixes.