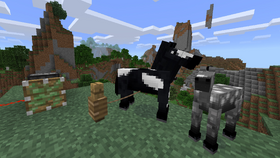 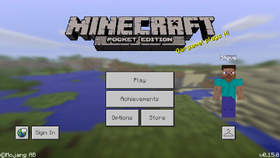 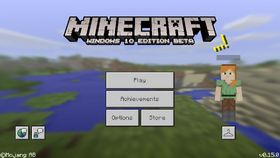 For a guide about all content in this release and the other releases of the Friendly Update, see Bedrock Edition guides/Friendly Update.

v0.15.0, the first release of the Friendly Update,[1] was a major update to Minecraft: Pocket Edition that was released on June 10 and 13, 2016. It added many new features such as pistons, horses, the full implementation of Realms, name tags, achievements, jungle temples, carrots on sticks, and many other new additions and changes.

During the Friendly Update development, Pocket Realms was essentially finished but still had to be beta-tested – three builds were released to the public to test. Unofficially, these builds were referred to in-game as "Alpha 0.15.0" (only the first one), but the developers had stated they did not contain the new features yet. Afterward, regular beta builds for the full update were rolled out like normal, and the full implementation of Realms came in the official release of 0.15. This version dropped support for Android 2.3 Gingerbread and iOS 6.