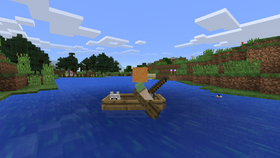 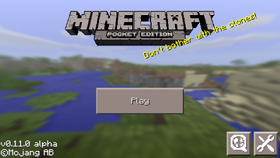 For a guide about all content in this release and the other releases of 0.11, see Bedrock Edition guides/0.11 releases.

v0.11.0 alpha was a major update to Minecraft: Pocket Edition which was released on June 4, 2015. Many new features were added in this update such as skins, boats, fishing, status effects, new mobs such as squid and cave spiders, and more.[1] Other notable changes included improved performance and the addition of formatting codes.

Before 0.11, some players would modify their game files to replace the default skin, but in multiplayer this would only be visible to them and would apply to all players. Proper skin changing had been noted as one of the key Java Edition features missing from Pocket Edition.