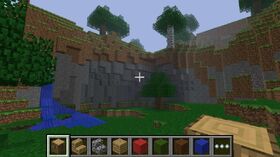 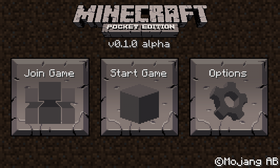 For a guide about all content in this release and the other releases of 0.1, see Bedrock Edition guides/0.1 releases.

v0.1.0 alpha was the first publicly released version of Minecraft: Pocket Edition. It was exclusively released for the Xperia PLAY gaming console on August 16, 2011.[1]

There was a planned v0.1.0 alpha that would have been released on Android, but the release was held back. The version would have had Black Touch Controls, and the menu would have looked the same as v0.1.1 alpha.

The apk file for v0.1.0 alpha has different internal versions. Any other differences are currently unknown.

A demo for Alpha 0.1.0 was released exclusively to the Xperia Play on an unknown released date. A prototype version of the demo was also released accidentally to assets.minecraft.net with the label "mcpe01_canada.apk".