Items with durability can be made unbreakable and never lose any durability. Additionally, items can have specifications for Adventure mode to describe which blocks may be broken with them.

All items can be given Modifiers which affect various Attributes of the player or mob wearing or holding them. Note that if an item has default attribute modifiers, these cease to exist if this tag is added (e.g. a diamond sword given an empty AttributeModifiers list no longer provides a boost to damage). Also note that default attribute modifiers do not use this tag, and as such, it does not appear on a natural item.

Leather armor can be colored, and all items can have custom display names and lore. Various tooltips can also be hidden.

There are two ways enchantments are associated with items; the first way is that the item is actually enchanted and the enchantment affects the behavior of the item, and the second way is that the item is an enchanted book which simply stores the enchantments without actually affecting the behavior of the item. There is also the RepairCost tag which tracks anvil usage for items, making them more costly with every use of the anvil.

StoredEnchantments tooltips are not displayed if edited onto an item other than an enchanted book. Enchantments stored in Enchantments, however, are always displayed in the tooltip and cause the item to glow, even if they cannot have any effect.

Potions, splash potions, lingering potions, and tipped arrows can have multiple, customized effects via the CustomPotionEffects tag. These effects are added to the default effect under the Potion tag if present. In addition the color can be overridden with the CustomPotionColor tag.

Book and quills use NBT data to save their contents.

Written books use NBT data to save their contents as well as miscellaneous extra information.

Bundles use NBT data to save what item is stored.

When used as a lodestone compass, compasses store information about their targeted lodestone.

Debug sticks use the NBT to save the block state to edit for each block.

Firework rockets use the tag tag to store information about their effects.

Firework stars use the tag tag to store information about their effects.

Maps may be scaled.

Heads of the player variety can be associated with a specific username to take on the skin of that player when placed. The hand-held item is also updated with the new skin. Within this section, the "owner" of a head means the player whose head it is a copy of, and a player whose inventory contains a head is called the "holder". 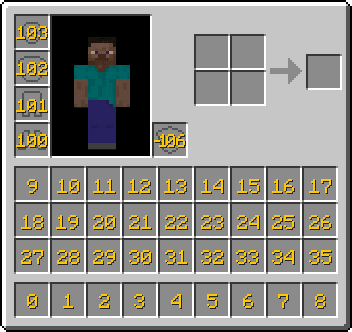 This section needs to be updated.
Please update this section to reflect recent updates or newly available information.
Reason: Almost certainly missing a lot of prior history