This page describes an edition of the game that has been officially discontinued.
This edition is no longer updated or available for digital purchase, but can still be purchased physically.
PlayStation 4 Edition 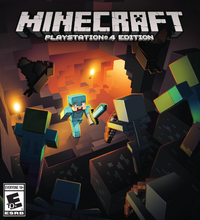 In default settings, the controls are always displayed on the HUD. The controls for PlayStation 4 Edition are similar to PlayStation 3 Edition and alongside touchpad support.