Edit
watch 28:07
Minecraft Interactive Experience
Do you like this video?
Play Sound
Not to be confused with woodland mansion.
See also: Tutorials/Defeating a pillager outpost

This article needs to be updated.
Please update this page to reflect recent updates or newly available information.
Reason: Needs to add the chance of finding an allay in a pillager outpost
Pillager Outpost 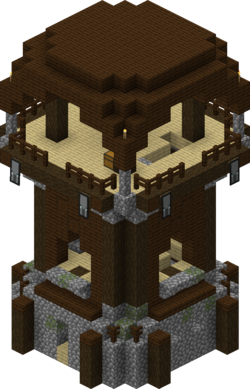 A pillager outpost is an assortment of structures inhabited by pillagers.

Pillager outposts are semi-rare structures, generating every several hundred to couple thousand blocks.[1] This makes them rarer than villages[2] but less rare than woodland mansions.

Pillager outposts can generate naturally in any village-generating biome, including:

Pillager outposts also generate in the following biomes, where villages do not spawn:

In Java Edition, pillager outposts never generate too close to, or within, villages. They can do so in Bedrock Edition as well generate far away from villages.

In Java Edition, if an outpost spawns in the water or in the air (e.g., spawning near a savanna plateau), then a platform of grass (or sand), dirt, and stone spawns underneath it in a circular shape. This also applies to the smaller structures such as tents, targets, log piles, and cages. On occasion, the smaller structures still spawn in the air despite having a platform below them, depending on how high up they are.

The outpost tower generates each time. Up to 4 other smaller structures may spawn around the periphery of the main outpost structure.

Iron golems and allays spawn only during the generation of the outpost structures. If an iron golem or an allay spawns, it does so only inside a cage. Pillagers do not attack iron golems in cages, although the iron golem can attack any pillagers that are one block near the cage, because iron golems can attack through a one-block wall.

Both regular pillagers and pillager captains can continuously spawn around the structure. Pillagers can still spawn if a player is inside the tower.[needs in-game testing] In Java Edition they spawn in a 72×54×72 area centered on the top level of the watchtower, the same level as the chest. In Bedrock Edition, they spawn at or below a particular location in the outpost; specifically, they choose the northwest corner of the highest opaque block with a non-solid block on top.

In Java Edition, only pillagers and passive mobs may spawn within a pillager outpost spawn area. Pillagers may spawn on any valid opaque block as long as the sky light level is 11 or lower, and the block light level is 8 or lower, but can also spawn on grass or sand blocks regardless of sky light level. Therefore, players may pacify an outpost by removing all grass/sand blocks and properly lighting the area as they normally would to prevent enemy mob spawns.

A total of eight pillagers, including the pillager captain, spawns in a pillager outpost.

Upon killing an outpost captain, the player receives 1 level of the Bad Omen effect applied to them for 100 minutes (5 in-game days).

A pillager outpost consists of a 4 level watchtower with other smaller structures around it.

Structure blocks can be used to manually load pieces of the pillager outpost from the /data/minecraft/structures/pillager_outpost folder in minecraft.jar. To do so, set a structure block to Load mode, enter pillager_outpost/<structure_name>, and press LOAD.

In Java Edition, each pillager outpost chest contains items drawn from 5 pools, with the following distribution:

In Bedrock Edition, each pillager outpost chest contains items drawn from 5 pools, with the following distribution:

Issues relating to "Pillager Outpost" are maintained on the bug tracker. Report issues there.