This page would benefit from the addition of more images.
Please remove this notice once you've added suitable images to the article.
The specific instructions are:
Pillager 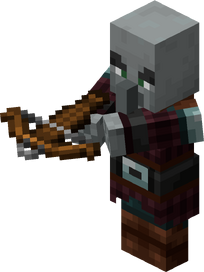 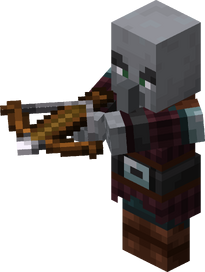 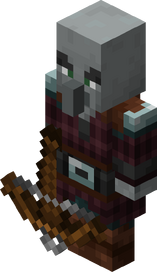 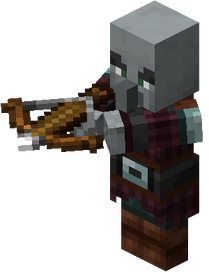 Pillagers are Illagers armed with crossbows that patrol the Overworld, guard their outposts, and participate in raids, sometimes spawning on ravagers in later waves of a raid. They are the weakest and most common of the illagers.

In Java Edition, the number of pillagers spawning in each patrol depends on the local difficulty, with one spawning as a patrol captain. Patrols occur after 51⁄2 in-game days, any time and independently of structures, which means they still spawn in worlds without generated structures. A patrol spawns 24 to 48 blocks away from a random player, on the highest solid block. The individual pillagers of a patrol can spawn only at block light level 7 or lower, regardless of sky light.

In Bedrock Edition, each patrol spawns 2 to 5 pillagers. One of these pillagers is a patrol captain. After 51⁄2 in-game days, patrols appear 24 to 48 blocks away from the player, at a light level of 7 and below on Easy or any light level on Normal and Hard difficulty.

Pillagers continually spawn in a 72×54×72 block volume centered on the top floor. They may spawn on any valid opaque block as long as the sky light level is 11 or lower, and the block light level is 8 or lower, but can also spawn on grass blocks or sand regardless of sky light level. There can be unlimited pillagers that spawn in outposts naturally, limited only by the natural spawning rules.

In Bedrock Edition, pillagers continually spawn at or below a particular location in the outpost, choosing the highest opaque block with a non-solid block on top and spawning on the northwest corner. There can only be a maximum of 8 pillagers spawned naturally in an outpost.

In a raid, pillagers are more common in the earlier waves, and decrease in number as the waves progress, except during bonus waves. Despite this, they still constitute the majority of raiders in total. The pillager is also the most common raiding mob in a raid. One pillager spawns riding a ravager in the fifth wave. In Bedrock Edition, one of the ravagers is ridden by a pillager instead of a vindicator on the seventh wave.

In Java Edition, a pillager spawned by a player using a spawn egg or command can be a captain, meaning it has an ominous banner sticking out of its head.

Pillagers are hostile toward players, iron golems, wandering traders and villagers, but not toward baby villagers. In Bedrock Edition, pillagers are also hostile toward snow golems. They attack by shooting arrows from their crossbows every 3 seconds up to 8 blocks away, and pursue their targets for up to 64 blocks‌[Java Edition only]or 16 blocks‌[Bedrock Edition only]. Because of their fast walking pace, they are extremely difficult to shake off.

Pillagers move slowly around when idle and loading crossbows in Java Edition. In Bedrock Edition, pillagers move from one place to another as fast as when they're provoked, although they stop and look around, pointing their crossbows along.

Patrols spawn as a group of 1 to 5 pillagers in Java Edition or 2–5 illagers in Bedrock Edition, one of which is the patrol captain. The patrol captain wears an ominous banner, known as the  illager banner in Bedrock and Education Editions, on its head. The other illagers follow the captain around. If pillagers are part of a patrol, they do not attack immediately. The patrol members' heads turn to follow the player's or of the villager-like mob who attracted their attention. If the player or villager-like mob attacks or approaches within 10 blocks of the patrol members, then this provokes them into loading their crossbows and attacking. This is intended behavior.[1]

If raiding pillagers kill all the villagers in a village, they celebrate their victory by jumping and laughing. In Bedrock Edition, pillagers wave their arms while holding their crossbows in their main hand when cheering. Unarmed pillagers also cheer.

When a pillager finds a target, it chases the target first, then it locks the target in its attack range and loads its crossbow.

Pillagers never retaliate against other pillagers or illagers. They always seek an assailant regardless of distance, unlike most other mobs.

Pillagers’ crossbows eventually break with repeated use, unlike weapons wielded by other mobs.[2] Unarmed pillagers are passive toward the player, iron golems, and villagers, but they still frighten villagers, and iron golems are still hostile toward them. This also includes pillagers that don't have a crossbow, which means any pillagers with a sword or any weapon other than a crossbow are still passive.

Unlike other illagers, pillagers always aid for other pillagers attacked by other mobs like zombified piglins or other neutral mobs.

Pillagers can use their crossbow in their off-hand, but the loading animation still uses the main-hand loading.

Non-raider pillagers are not attracted to ominous banners.

Pillagers use the outdated attacking AI in Bedrock Edition, which has been fixed in Java Edition.[3][4] They also have broken arm textures, which has been confirmed as a bug.[5]

When a pillager finds a target, it loads its crossbow first, chases the target and attacks upon in range. Pillagers are not hostile to players before their crossbows are loaded, so sometimes they don't look at players or run away while loading their crossbows.

A dispenser can equip a pillager with armor. However, armor isn’t rendered on pillagers.

If a player summons a pillager without a crossbow by spawn event command, it still shoots arrows to attack targets, like other arrow-shooting ranged mobs. This is due to the fact that in the pillager.json and ranged piglin.json files, the component_groups have both minecraft:behavior.ranged_attack and minecraft:behavior.charge_held_item, so if a pillager does not have a crossbow, the "charge_held_item" behavior cannot trigger and it continuously shoots arrows due to the "ranged_attack" behavior.

Pillagers use a melee attack whilst underwater, unlike pillagers in Java Edition that maintain using crossbows underwater, although the shot arrows travel slower underwater and sink after a short distance.

Pillagers can pick up and equip illager banners within 3 blocks.

Pillagers with Multishot or Piercing crossbows don't have these enchantments’ effects, this bug is fixed in Java Edition.[6]

In Bedrock Edition, raiding pillagers also have a 65% chance on Easy and Normal, or 80% chance on Hard difficulty, to drop these:

If a player kills a pillager captain (a pillager wearing an

ominous banner ‌[Java Edition only]/illager banner ‌[Bedrock Edition only] on its head), they receive the Bad Omen status effect. The effect lasts for 100 minutes (5 in-game days) and can be removed by drinking milk. When a player afflicted with Bad Omen enters a village, a raid commences in that village, bringing about waves of illagers that seek and try to eliminate all villagers in the village.

Each patrol spawns one pillager captain. While outposts can continually spawn pillager captains, each captain inflicts the player who killed it with one level of Bad Omen upon death. Raid captains do not inflict Bad Omen when defeated in a raid. In Java Edition, killing multiple captains in succession raises the Bad Omen level to a maximum of V, increasing the chance of pillagers and vindicators in the resulting raid wielding enchanted weapons. As long as the Bad Omen level is higher than I, the resulting raid includes an additional wave with a raider composition identical to that of the last wave.

Pillagers have entity data associated with them that contains various properties.

Issues relating to "Pillager" are maintained on the bug tracker. Report issues there.