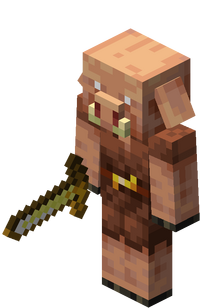 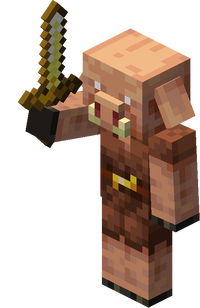 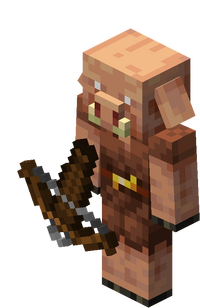 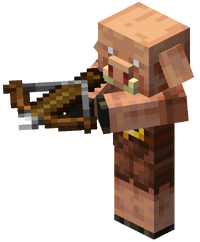 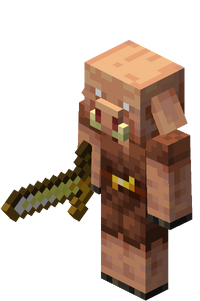 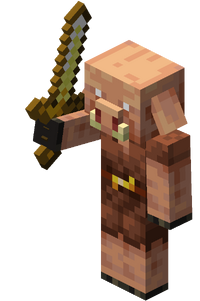 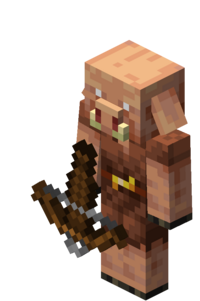 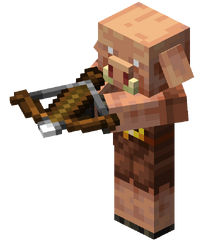 A piglin is a neutral mob found in the Nether. They become hostile unless the player is equipped with at least one piece of golden armor. Players can use gold ingots to barter with them for various items.

Adults have an 8.5% chance of dropping the held item (a golden sword or crossbow with random durability). Each Looting level increases this chance by 1%.

In Java Edition, a picked-up item always drops with the same durability as when picked up. In Bedrock Edition, armor picked up by piglins can lose durability and even break depending on how much damage the piglin takes. Piglins do not drop gold ingots, raw porkchops, or cooked porkchops that they have earlier picked up.

Adults sometimes spawn with 1-4 normal or enchanted pieces of armor, which may be:

These are dropped with an 8.5% chance and random durability.

They can also pick up other types of armor.

Adults drop 5 and an additional 1–3 per armor piece if killed by a player or tamed wolf. Baby piglins drop 1.

Like villagers, piglins can open and close wooden doors but cannot open fence gates, all trapdoors, and iron doors.

Piglins cannot swim and can drown if submerged; this is intentional behavior.[1] They are not naturally immune to fire or lava.

Piglins pick up raw porkchops and cooked porkchops that are within 1 block from them, unless they've done so within the last 10 seconds.

Crossbow piglins do not reload their crossbows when spawned, unlike pillagers. They reload only when provoked.

Baby piglins are passive and play with baby hoglins, running around and riding upon them. Up to 3 baby piglins may stack on top of each other while riding a baby hoglin.

Baby piglins never grow up; this is intentional behavior.[2]

Adult piglins are neutral if the player is wearing at least one piece of golden armor. Piglins are provoked by any player who:

When a piglin is attacking, it holds its dominant arm and sword in front of it, similar to a vindicator.

Adult piglins are hostile toward wither skeletons and withers.

Adult piglins congregate within 16 blocks and attack in hordes.

When attacking with a crossbow, piglins shoot arrows every 2 seconds. In Java Edition, they walk backward (stopping if at the edge of a drop) as soon as the target is close. Their crossbows can break if it runs out of durability, making the piglins use their fists. Unlike mobs armed with bows, they do not strafe from left to right while shooting. Piglins with swords and other items rush at the player.

If a group of piglins successfully defeat their target, they gather at the site of their target's demise and emit "celebration sounds". However, piglins do not have a chance of dancing unless their target was a hoglin.

Iron golems attack both adult and baby piglins; however, piglins do not attack iron golems without provocation.

Piglins sometimes attack hoglins, causing other piglins and piglin brutes‌[Bedrock Edition only] in that area to attack the targeted hoglin as well.

Adults do not immediately attack adult hoglins on sight, but a piglin has a random chance to make the decision to hunt a hoglin (this decision almost never happens if the piglin recently hunted, but other piglins can still start a hunt).[verify] Once that piglin attacks the hoglin, all other piglins and piglin brutes‌[Bedrock Edition only] in that area become hostile to the hoglin. If outnumbered by hoglins, the piglins flee, making "retreat" sounds. After defeating a hoglin, piglins have a 10% chance to do a "victory dance" by bobbing their heads and sticking out their arms like a T-pose.

The more piglins there are, the bigger chance of a hunt might happen (because a lot of piglins that saw the hoglin has a 10% chance of starting a hunt).

After a hunt, any nearby piglins pick up the porkchops or cooked porkchops the hoglin dropped but not the leather. Piglin brutes never pick up any porkchops or leather.

Piglins that spawned as part of a bastion remnant during world generation do not hunt.

Piglin brutes also join in hunts started by piglins, but do not start a hunt themselves.‌[Bedrock Edition only]

Adult piglins can trade gold ingots for certain items, when a gold ingot is dropped near them or the player uses it while looking at them. The piglin "examines" the ingot for six‌[JE only] or eight‌[BE only][8] seconds, then drops a random item from the chart. However, baby piglins examine the ingot and then run away without dropping an item. Piglins can also pick up items dropped by a dispenser or dropper. The pool for what piglins can barter may be modified in a Data Pack‌[JE only].

Piglins can still barter while riding another mob.

Piglins can pick up and equip any items they come across, preferring gold-related items, which they actively seek out. A piglin inspects any gold-related item before equipping, holding or putting that item in its inventory for six seconds after picking it up. However, items not related to gold are held or equipped (if the piglin does not have any gold equipment) instantly. Piglins do not pick up any items if the MobGriefing gamerule is set to false.

Piglins have eight hidden inventory slots in which they can stack items. Piglins with full inventories do not attempt to pick up gold-related items, except gold ingots. Baby piglins attempt to pick up any item and do not give the player any items in exchange for gold ingots. Adult piglins can pick up gold nuggets (which do not help to obtain better items from bartering but are immediately placed in their inventory), porkchops, and cooked porkchops (they do not actively seek out and contemplate porkchops). Piglins drop any of these items upon death aside from gold ingots, raw porkchops, and cooked porkchops.

If a piglin is killed in one hit while admiring a gold ingot, the ingot does get dropped upon the piglin’s death.

When a piglin is admiring a gold ingot while bartering, it does not run away from nearby zoglins or nearby zombified piglins.

Piglins with crossbows can pick up normal or enchanted crossbows and equip them.

Like other mobs capable of picking up items, piglins pick up armor and weapons. Piglins pick up armor that is better than the armor they are already wearing, although they prefer gold over stronger armor. For example, a piglin does not pick up leather boots if it is already wearing diamond boots, but may discard a netherite chestplate to pick up a golden chestplate. However, they cannot unequip and discard armor with Curse of Binding.

Piglins that spawned in a bastion remnant during world generation, or that have picked up items or equipment do not despawn naturally.

Items picked up by a piglin do not drop when the piglin is killed.

These items are listed in the name:data/minecraft/tags/items/piglin_loved.json.

Gold-related items not wanted by piglins[]

Gold-like items not wanted by piglins[]

When in the Overworld or the End, piglins transform into zombified piglins after 15 seconds, retaining their armor, held items and their name. However, they cannot shoot a crossbow, using it instead as a melee weapon. Upon transformation, the spawned zombified piglin has the Nausea effect for 10 seconds; this is just a cosmetic effect. When a piglin transforms into a zombified piglin, it drops anything except equipped weapons and armor in its inventory; other items in its inventory disappear. In Bedrock Edition, if the game is set to Peaceful difficulty, the piglin despawns instead of transforming because hostile mobs do not exist in Peaceful difficulty. A piglin that returns to the Nether before 15 seconds remain unchanged.

Piglins summoned in the Overworld or the End with no AI do not zombify, nor do they pick up armor, weapons, or gold items.

Piglins have entity data associated with them that contains various properties.

Issues relating to "Piglin" are maintained on the bug tracker. Report issues there.

This page would benefit from the addition of more images.
Please remove this notice once you've added suitable images to the article.
The specific instructions are: A gif render of a piglin breaking its crossbow