This page describes an edition of the game that has been officially discontinued.
This edition of Minecraft is no longer updated.
Pi Edition 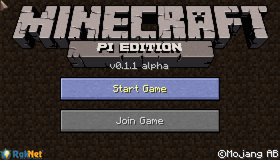 Minecraft: Pi Edition is an edition of Minecraft developed for the Raspberry Pi. It is based on Pocket Edition Alpha v0.6.1 but slightly cut down, containing a revised feature set and support for multiple programming languages. Pi Edition is intended as an educational tool for novice programmers. Although officially discontinued, it is still available to download for free, from the official downloads page, and users are encouraged to interact with the game using an API.[3]

Pi Edition never received any subsequent updates and is no longer updated. Despite this, it was included by default in Raspberry Pi OS (formerly Raspbian). However, it is no longer supported.

Minecraft: Pi Edition was originally announced on the Mojang Studios website on November 24, 2012.[4] There was a compiled build labeled 0.1 on the Mojang repository, albeit encrypted until the game's launch in February 2013, making it inaccessible. When it was first uploaded, however, it was unprotected for a short amount of time, allowing for the download of the game before its true release. On December 20, 2012, Mojang Studios released a post on their official site announcing the release of Pi Edition. However, it was promptly removed and no game release was made.

Minecraft: Pi Edition was publicly released on February 11, 2013, as version 0.1.1, and the previous release announcement post was restored.[2] However, the Pi Edition website still lists its post date as December 20, 2012.

On September 15, 2014, the Raspberry Pi Foundation announced that Minecraft: Pi Edition would be installed by default with their new versions of Raspberry Pi OS.[5]

Pi Edition never received any subsequent updates, and its developers gave no further insights as to whether they were still developing the version. When brought up to Tommaso Checchi on Reddit on January 25, 2016, he stated the following:

Pi Edition was very similar to Bedrock Edition in many ways. Like older versions of Bedrock Edition, (then called Pocket Edition) only 256×256×128-block old worlds could be generated. The player's skin is always the default "Steve" skin. The title and the world selection screens were identical until Pocket Edition updated to Pocket Edition v0.7.0 alpha.

The player has the ability to sneak, but cannot sprint. Mobs do not spawn, even though the player starts with an iron sword in the hotbar. A bow is also available, but when used, the player will hold the bow back indefinitely until they select another item or exit the world.

Pi Edition includes all blocks from Pocket Edition v0.6.1 alpha. The only game-mode is Creative Mode and there is no crafting or smelting.

All blocks use old Java Edition textures, unless otherwise noted.