ominous banner, known as the

illager banner in Bedrock and Education Editions, on its head. The other illagers follow the captain around.

In Java Edition, patrols never spawn if /gamerule doPatrolSpawning is set to false.

Patrols spawn naturally after the world age reaches 100 minutes (5 in-game days), then after a delay between 10–11 minutes an attempt is made to spawn a patrol with 20% chance of success. After an attempt is made, the delay is reset.

Patrols spawn in any Overworld biome except mushroom fields and its variants, although a patrol may wander into a mushroom biome after spawning.

Patrols can spawn during the day on blocks with a block light level of 7 or lower. If a player is within two chunks of a village, patrols do not spawn[verify]. 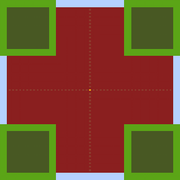 The game picks a random location 24–48 blocks away from the player to try to spawn the patrol's captain. If a pillager cannot spawn at the chosen position, it gives up and does not spawn anything. If the captain can spawn, the game tries to spawn 1 + localDifficulty (rounded up) more pillagers within a 4-block radius.

In Bedrock Edition patrols spawn around 24–48 blocks away from the player (or more than 48 blocks away if the player is in a village). Additionally, patrols can spawn in biomes where common monsters cannot spawn such as in:

Patrols spawn on solid blocks at light level 0–7[verify] at the surface, like monsters.

To spawn an illager (for example, the patrol captain):

The members can be any illager or a witch. A ravager spawned as a patrol member is immobile and does not attack, even when hit.

Patrol looks at a villager and attracts their attention.

Patrols seek villages, wander around, and attack nearby players, adult villagers ‌[BE only], iron golems, snow golems‌[Bedrock Edition only] and wandering traders. The patrol members' heads turn to follow a player or villager-like mob who looks at them or attracts their attention. A player or villager-like mob who approaches within 10 blocks of the patrol provokes them into loading their crossbows and attacking, and pursuing if the player flees. The pursuit lasts until either of the parties die or get 10 blocks away.

In Java Edition, any illagers, ravagers, or witches that did not spawn with the patrol can join the patrol if sufficiently near a patrol captain. Evokers and illusioners who join a patrol wander around but do not seek out targets as other illager members in the patrol. They still do cast spells to attack mobs, however. If a "Johnny" vindicator joins a patrol, all patrol members assume the Johnny vindicator's aggressive behavior, attacking any non-illager mob.

In Bedrock Edition, when one of the patrol members is attacked, it alerts nearby patrol members within 10 blocks to attack the same target as a swarm. The attacker can be any mob and doesn't need to be a player, and the distance between attacker and patrol can be up to 64 blocks away from alerted patrol members. That means a llama accidently spitting on a patrol member can provoke the all the members of the patrol. Vindicator patrol members attack the player and target directly without prior provocation.

Just like normal pillagers, when a patrol pillager's arrow hits another pillager, the hit pillager does not retaliate, although the vindicator might attack the pillager that hit it.‌[Bedrock Edition only]

The patrol captain always drops an ominous banner, known as the illager banner in Bedrock Edition, upon death.

Upon killing a patrol captain, the player receives the Bad Omen effect for 100 minutes (displayed as infinite in Java Edition), which has no consequences unless the player enters a village. Upon entering a village, the effect is removed from the player and a raid spawns nearby after about five seconds. In Java Edition, the level of the Bad Omen determines the chance of enchantment on raid member's weapons, and additional waves. The number of waves depends on the difficulty. In Bedrock Edition, killing multiple pillager captains does not give you another level of Bad Omen. The Bad Omen effect can be removed by drinking milk, entering a village, or waiting until the effect is over.

Issues relating to "Patrol", "Pillager patrol", or "Illager patrol" are maintained on the bug tracker. Report issues there.