This article is a stub.
You can help by expanding it.
Patrick Geuder 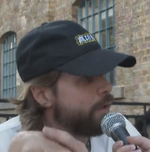 Karl Patrick Geuder is a Mojang Studios employee who performs large-scale data analysis. Until July 3, 2012, Geuder was a contractor who provided services to a variety of companies, with Mojang being one of them.