Edit
For the mob in Minecraft Dungeons, see MCD:Parrot.
Parrot 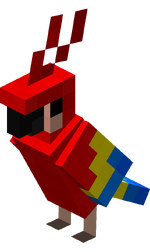 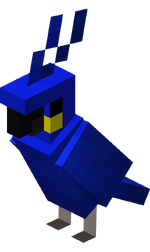 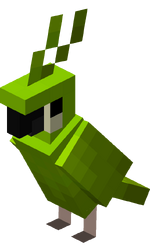 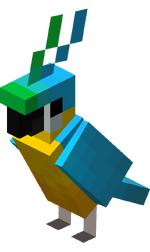 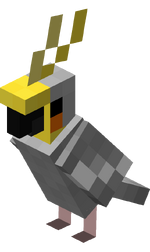 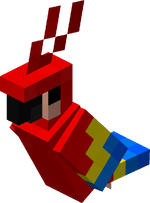 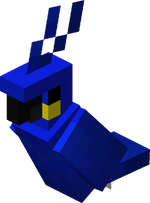 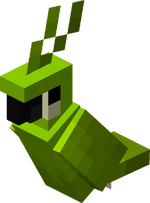 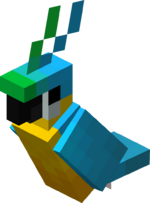 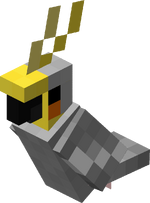 Parrots are rare tameable mobs found in jungles. Parrots can imitate sounds of nearby hostile mobs and can perch on the player's shoulders.

Parrots rarely spawn, with a 0.2 chance in jungle biomes. They can be found in groups of 1–2 at Y-level 70 or above. They spawn only on logs, leaves and grass blocks.

When a parrot is killed, it drops:

Parrots are passive. They can fly, and usually fly upward if struck. They fly under normal conditions, but they can tire[1] and return to the ground.

Parrots crowd and settle around other nearby mobs, including neutral and hostile mobs.

When in water, a parrot swims by flapping its wings.

Parrots can be tamed by feeding them wheat seeds, melon seeds, pumpkin seeds, or beetroot seeds, with 1⁄3 chance of success. Once tamed, interacting with a parrot makes it sit down and stand up.

Like tamed wolves and cats, a tamed parrot follows the player unless told to sit, and may teleport if there is a sufficient distance between them and the player. Like all tamed animals upon death, a death message is displayed to its owner.

Parrot teleportation is completely silent, which is intentional.[2]

Unlike most animals, parrots have no baby form, and cannot be bred.

A parrot dismounts its player when the player:

Parrots on a shoulder always look in the same direction the player's head is looking.

A parrot on a shoulder cannot take any damage but may get hurt as soon as it dismounts, as when dismounting a player submerged in lava.

Parrots imitate the idle sounds of nearby hostile and certain neutral mobs (including the hiss of creepers for example); they have a detection range of 20 blocks (cubical). The sound produced by the parrots is simply the same sound as the mob being mimicked at a higher pitch. They tend to look in the direction of the mob they are mimicking. Occasionally, a parrot may imitate sounds of mobs that are not in the area.[4]

Parrots dance near a jukebox if a music disc is inside it. Parrots even have the ability to dance while on a player's shoulder.‌[BE only] This is a reference to the Party Parrot meme.[5] The game does not seem to have any real way to determine when the music ends, though; as long as the disc remains in the jukebox, the parrot continues dancing even after the music stops.[6]

The dancing radius is 3 blocks from the jukebox. If they dance and then fly beyond this radius, they stop dancing. A parrot does not dance if the music disc was inserted prior to it spawning, dismounting, or being within the 3 blocks range.[7]

In Java Edition, attempting to feed a parrot a cookie instantly kills it, emitting Poison particles as it dies. In Bedrock Edition, feeding a cookie to a parrot gives it fatal poison instead. This is a reference to the fact that chocolate is toxic to parrots.

Note that these are the original mob sounds, and not the pitched up ones heard from parrots in game.

Parrots have entity data associated with them that contain various properties.

Issues relating to "Parrot" are maintained on the bug tracker. Report issues there.