Minecraft Wiki
Register
Don't have an account?
Sign In
Advertisement
in: In development, In development Java Edition, Renewable resources,
and 3 more
English 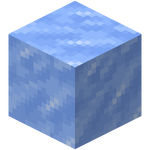 This article is about the block found in the Ice Spikes biome and in frozen oceans. For other uses, see Ice (disambiguation).

Packed ice is an opaque solid block variant of ice. Unlike regular ice, it does not melt near bright light sources.

Packed ice generates as windows in igloos.‌[Bedrock Edition only]

Wandering traders have 1⁄6 chance to sell packed ice for 3 emeralds.

When a non-full block is placed on top of packed ice, the block has the same 'slipperiness' as the ice below it; although, if packed ice is placed below soul sand, it amplifies the slowing effect of the soul sand rather than making it slippery.

Boats can travel on packed ice with a top speed of 40 m/s. Ice tracks built from blue ice, packed ice, or a combination are useful for long-range travel in all three dimensions.

Mobs can spawn on packed ice. This can allow for compact mob farms that rely on the tendency of pushed mobs to slide off the ice in some way.

Packed ice is a completely solid block, and allows placement of any objects on top.

Unlike normal ice, packed ice does not melt if placed near light sources.

Packed ice is not a storage block, as it cannot be crafted back into ice.

Packed ice can be placed under note blocks to produce chime sounds.

Issues relating to "Packed Ice" are maintained on the bug tracker. Report issues there.