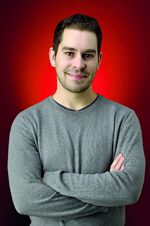 Owen Jones, formerly known as Owen Hill, is the Director of Creative Communications at Mojang Studios. Before joining Mojang, Jones worked as the web editor for PC Gamer, where he gained a reputation for producing high-quality work at an equally high quantity,[1] gaining the attention of Markus Persson, who became determined to hire him. In August 2012, it was announced that Jones would be bidding farewell to PC Gamer and would be moving to Stockholm, Sweden the following September to work with Mojang.[2][3]