Edit
watch 28:07
Minecraft Interactive Experience
Do you like this video?
Play Sound
Not to be confused with Mycelium.
"Nether Grass Block" redirects here. For the main ground block in the overworld, see Grass Block. For other uses, see Grass (disambiguation).
Nylium 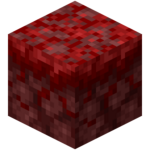 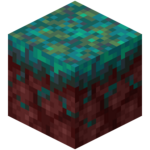 Nylium is a variant of netherrack that generates in the Nether. It has two variants: warped nylium and crimson nylium which both spawn in different biomes.

Using bone meal on netherrack that is placed next to or adjacent to warped or crimson nylium transforms the netherrack into nylium of that type. No block can be above the netherrack during this process. This transformation can also be done by activating a dispenser with bone meal directly into that netherrack block. If both variants are present, there is an equal chance of either being spread.

Fungi can likewise be grown into huge fungi using bone meal, though the fungus must be placed on the same type of nylium, or the bone meal will not even be consumed.

Nylium can be placed under note blocks to produce "bass drum" sounds.

Issues relating to "Nylium" are maintained on the bug tracker. Report issues there.