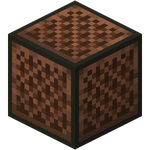 A note block is a musical block that emits sounds when used or powered with redstone.

Note blocks are most quickly broken with an axe.

Note blocks play a musical note when hit (pressing the attack button) or powered by redstone. A note block must have air in the space directly above it to play a sound. Notes can be heard up to 48 blocks away. The volume of a note block decreases as the player gets further away from it. The sound of note blocks (as well as jukeboxes) can be independently controlled by the Jukebox/Note Blocks slider in the audio settings.

Note blocks play when on or next to a powered block. Each time a note block plays a note, a note particle may fly out of the top (if pressed too fast, notes may not appear), with the color depending on the pitch (but not the instrument).

There are 16 different instruments and 25 different pitches per instrument. Pressing the use button on the block increases the note pitch up a semitone, with a total of two full octaves and a semitone (25 semitones in total) being available for each instrument. The standard range (for harp and pling instruments) of notes span from F♯3 to F♯5. After reaching the highest note, pressing use again resets the pitch back to F♯3, as does breaking the block and picking it back up.

The exact pitch to use-count assignment is shown below,[1][2] along with the note's color, which is rendered with shading using the particle's texture.

Alternatively, there is a graphical version available:

Players can roughly check the tuning of a block by looking at the note icon.

In Java Edition, the tuning can also be checked by looking at the right side of the debug screen (accessed by pressing F3). It is denoted as "note:" followed by a number from 0 to 24.

This article needs cleanup to comply with the style guide. [discuss]
Please help improve this page. The talk page may contain suggestions.
Reason: maybe move this to #Sounds

The instrument played depends on the material of the block underneath the note block. Note that these are groups of blocks defined by the code, not just the individual block.

Note blocks can be powered in a variety of different ways following normal redstone principles; however, some ways of powering note blocks are more convenient than others or produce unexpected results.

Note blocks can be used as a fuel in furnaces, smelting 1.5 items per block.

In Bedrock Edition, a note block has a block entity associated with it that holds additional data about the block.

This section is missing information about Info on the block entity used before 17w47a.
Please expand the section to include this information. Further details may exist on the talk page.

Issues relating to "Note block" or "Noteblock" are maintained on the bug tracker. Report issues there.