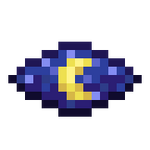 Night Vision is a status effect that enhances the player's ability to see in darkness and underwater.

In Java Edition 20w14∞, in certain dimensions with unique lighting, the player can see the color spectrum that is not parts of the vanilla lighting system (e.g. vivid shades of green, blue, etc.) easily as the effect is not as fully bright, even with the "Bright" brightness setting (in other cases, in some dimensions (such as Easter Egg dimensions like ant) already have the full brightness at any light levels (including light level 0), so the night vision effect is indifferent from the player without the effect in the dimensions). However, the extreme darkest saturated color that can be seen in the uniquely generated dimension with this status effect is
blue within the relative luminance value of exactly 0.0722 (as in an Easter egg dimension called blue).